I was reading a few years old lonely planet, and talking about Aral lake they mentioned a Dam system (with a new Dam that was planned to be ready by 2016), and the hope that waters would reach Aralsk again by 2017.
So what is the real situation now? How far is the lake from Aralsk?
How interesting could be to venture there (considering I’ll be “near”, visiting Turkistan) and that I’m into photography and less touristic but interesting/unique places?

Last question: is there still rusting ships laying in the mud? Where are they (the biggest number) exactly? Like near Aralsk, or in other towns?

You can read our article which has all the info: https://caravanistan.com/kazakhstan/cen ... da/aralsk/
0 x
If you like Caravanistan: we have opened a tip jar! We love you back!

Actually I remember Hotel Altair being open in august 2016, very close to the train station, and I saw at least one more "hotel" sign...so probably Aral Hotel is no more the only one in town...

From a short research on google maps it looks like there are even more: probably it's time to update that article... Thanks, need a reviewer to visit for the hotels indeed...
0 x
If you like Caravanistan: we have opened a tip jar! We love you back!

I went to Aralsk on August Bank Holiday in 2017, so a little over one year ago. My guide was Serik Dyussenbayev, whom you can reach on Facebook. I found Aral hotel to be closed, even though there were builders outside, and I stayed at the Altair, mainly because I'm a lazy ass and that's the first place I found as I got out of the station.

As for the Korakal dam, the enlargement hasn't happened yet. I was told, in town, that the World Bank was ready with its financing, but that they were waiting for the government to cough up its part of the cash; at present the edge of the lake is still quite a way from Aralsk harbour.

With regards to the Altair, I got use of a 3-bed room (beds being the usual planks of wood with a mattress) for 3000 tenge, including breakfast. Décor is your classic "Russian nouveau-riche", with dark green wallpaper, fake crystal chandeliers. Shared bathroom in decent state. If you want a crappy photo of the room, here it is: 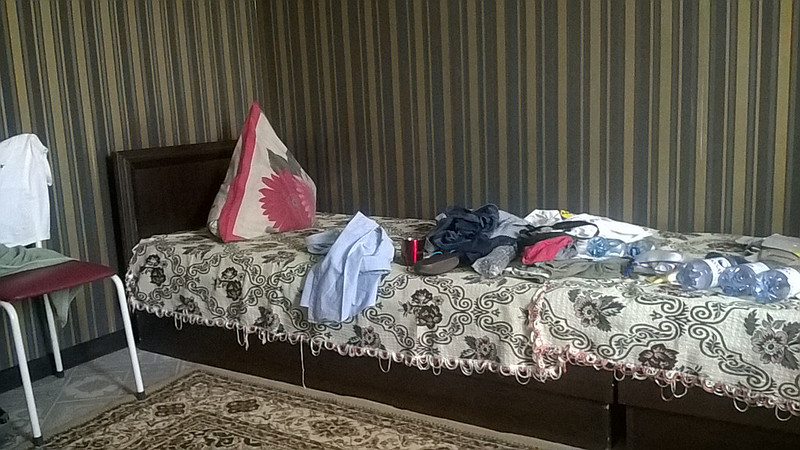 There is some sort of wi-fi, and my room had a conditioner which, though, didn't work, but had a mosquito net. By the way, the square outside was used for a rave during the night, with local kids pumping hardbass out of a Lada with a modified stereo; it wasn't that bad, reminded me of my old days clubbing!

Finally, if you allow some shameless self-plugging, here's a link to my blog series about Aralsk: https://awtytravels.com/tag/aral/
2 x
www.awtytravels.com
Stories from the road.
Top

Just came from Aral yesterday and wanted to give a quick update about hotels. We stayed in Altair - a double room cost us 6000 tenge, with bathroom. No breakfast and honestly nothing seemed to work - the shower was broken and so was the door-handle, pillow cases didn't really fit the pillows and so on. We kind of liked the place at first glance and that's why we decided to stay, but I would do a quick room check-up before you agree.

Before we came to Altair, we walked a bit around the town and there are other hotels - one is just across the square from Altair (I can't recall the name, but you will see it once you walk out of the train station). Another one is Shanyrak on Abulkhair Khana street, closer to the main square and museums (you can find the exact location on maps.me). The first one had the door closed when we came at around 9 in the morning, but there is a phone number so you can try calling. Shanyrak had the door open, but we couldn't find any receptionist or a phone number - while the hotel sign is attached to a gloomy ruin, the hotel itself is in the next building which seemed okay inside.
2 x
Top

I stayed at Gostinitsa "Keruyen Sarayy", at the edge of town. I parked my motorcycle next to the front door in a fenced area. The room was big and had working air conditioning. The hotel was very quiet and I slept uninterrupted. The sheets were soft and clean. The shower worked flawlessly with really hot water. They offer breakfast, but I have not tried it yet. My only complain is that you could feel the springs in the mattress.

I finally went to Aralsk as it was a nice way to cut in two the train ride between Aktau and Almaty. I stayed at Asem Hotel (located on Maps.me, 10 min walk from the station). Super clean, strong internet, hot shower and a manager that keeps listening to Michael Jackson, what else do you need ? Starting price is at 3000 Tenge for one person and you can bargain a little. Really nice people, they let me keep the room until 5 the next day.

Not much to do in town, tours to the sea are really expensive if you’re on your own. That said I kind of liked it here, it’s really more lively than Muynaq in Uzbekistan, plenty of restaurants and small shops.
2 x
Top
Post Reply
8 posts • Page 1 of 1

Users browsing this forum: No registered users and 2 guests