Thanks mpkz, do let us know how it was in Uzbekistan. It's also a great skiing destination! (I seem to remember you asked a question about that before) - http://caravanistan.com/trip-reports/he ... zbekistan/
0 x
If you like Caravanistan: we have opened a tip jar! We love you back!

steven wrote:Thanks mpkz, do let us know how it was in Uzbekistan. It's also a great skiing destination! (I seem to remember you asked a question about that before) - http://caravanistan.com/trip-reports/he ... zbekistan/

Thanks, will do! I'd definitely love to come back here for some skiing (and Almaty as well since I missed out on that thanks to CouchSurfing being too great). Super hospitable people (almost on par with Iran) and I love the low prices.

Keep up the good work with this site.
0 x
Top

We (Australians) got an LOI from the Caravanistan form - Uzbek Travel. 7 day turn around as promised - delivered with prepared application forms. Highly recommended.

Arrived at embassy at 2pm, normal wait like everyone else, they took our applications at 3pm, payment slip to bank at 4pm and back to pick up visa at 5pm. Despite everything seeming pretty chaotic all around it went very smoothly for us.

Only hitch, they changed the dates. We wanted to enter 26/8 but they would only give us a visa from 3/9 - no explanation - someone in the queue said they had been told that they aren't giving any visas until after independence day celebration 1/9. Can anyone verify that?
0 x
Top

Yes, no visas until 3rd of September due to Independence Day.
0 x
If you like Caravanistan: we have opened a tip jar! We love you back!

It is currently very difficult to get the Uzbek visa in Almaty. I did get LOI through Caravanistan, but I just couldn't get anything sorted on the embassy itself. I came in 3 days in a row (last Wednesday, Thursday and Friday) . On Wednesday it was closed (while it was supposed to be open) for no apparent reason. On Thursday and Friday each day there were literally 150 people waiting, so I could wait there in cold all day and I won't be able to get my turn. I was told that Uzbeks needs to change their passports to electronic ones by the end of the year, so I think it will stay like this until then. I tried to persuade guards and embassy representative to sort me out with priority, but I did not have any luck.

Ultimately I decided to go to Bishkek and get my visa there.
1 x
www.sinetermino.com · Travelling around the world without specific destination.
Top

Got my visa today very successfully in two and a half hours in total.

NOTE: I had a letter of invitation, so I can't comment on how things will play out if you don't. However, I would heavily recommend that you do go with the LOI option, as I believe the waiting time for the visa without an LOI is roughly equal to the waiting time for an LOI, and getting an LOI doesn't require you to give up your passport to anyone. Also, when I finally got around to it, getting a hostel/hotel/other company to organise an LOI was definitely less hassle than I thought it might be (outside of the waiting time). I should say that I don't know exactly how important LOIs are for various countries. I'm an Australian citizen and was with a British citizen who also had an LOI with him and we each had the exact same successful outcome.

What to bring:
* Passport
* Printed and completed visa application form (http://evisa.mfa.uz/evisa_en/?action=vvod) with passport photo attached (if you forgot to glue your passport photo, don't worry, they will staple it to the form for you)
* LOI
* Photocopy of your passport (if you don't bring this, there is a solution which I will explain later in the post)

Firstly, it seems the embassy has changed it's opening times and is now open from 3-6pm (as opposed to 2-6pm which has been reported in previous posts). There was a large group of people waiting outside and the security guys will give priority to people wanting to apply for visas (presumably because this is a reliable source of income). Getting noticed by the security guards did literally take a little bit of shoving and pushing (holding my visa application form up in the air also helped), but when they are ready to let the next lot of visa appliers through the gate they made sure a path was made through the crowd and we were able to get through with just a little bit of firm ground holding.

Once inside the embassy we found that the windows at each cashier remained closed the entire time, and we simply had to wait for a man to pop out from the door and address us. He took our passports, visa applications and LOIs. He then reappeared 10 minutes later with a slip of paper to take to the bank nearby to pay for the visa (ridiculously, they don't actually accept money at the embassy). He will give you instructions to get the the bank, which are simply straight down the road and left. The bank is a Center Credit bank.

Once in the bank, get a ticket from the ticket machine at the door (second button from the top) and wait for your number to appear to be served. You can pay in either dollars or tenge and you will receive a receipt as proof of your payment. IF YOU DIDN'T BRING A PHOTOCOPY OF YOUR PASSPORT then now is your time to amend this error (as we had to). If you ask the security man near the door he will do a photocopy for you for 20 tenge (which is literally nothing). I used extremely rudimentary Russian ("mozhna pazhloosta photocopiya") whilst pointing at the photo page of my passport and this worked.

Return to the embassy and you will need to go through the shoving/pushing/waiting process again to get back through the gate (repeat same tactics as before). Once through, you will again need to wait for the man to pop from out of the door and this time you need to give him your passport, visa application, LOI, receipt and photocopy of your passport. He then returned in about 10-15 minutes and we were the happy owners of Uzbek visas!
1 x
Top

Thanks for the elaborate post. We (1 UK and 1 Dutch citizen) had exactly the same experience yesterday. Total costs for he visited was 160 USD for us.
1 x
Top

I just had my Uzbek visa in Almaty a week ago, here's a little update about the procedure.

The embassy is still closed on Wednesday and week-ends. The office hours for the visa is from 3 pm to 6 pm.

When you'll arrived in front of the embassy there will be a lot of people, as soon as the policeman opens the wire rack that leads to the backyard keep your passport and the others documents you've collected for your visa and yell "visa". Doing this you'll get almost easily through the crowd.
Once your in the backyard you'll quickly notice that there's one guy that's in charge of the visa stuff, give him your documents and passport. He will check everything and let you know if something missing. If everything is ok, he will tell you to come back three days later.
When you'll come back (same opening hours and same way to go in), you'll have first to give your passport to the visa guy, then he will ask you to go pay the fees (105$ that you'll have to pay in tenge) to the Creditbank close to the embassy. You'll come back and wait until he checks once again everything and gives you back your passport. This second part took more or less two hours.

When you're filling the form there's a part saying "duration of the visa procedure" and you have the choice between "urgent" or "regular", I choose "urgent" and met a guy that have choose "regular" and had to wait one month to get his visa, although it was cheaper, the "urgent way" worked well for me.

Hope this little update will be useful!
Mugo
0 x
Top

Visas in passports in 2 hours for $75 (aussie) and $18(japanese), both with LOIs even though not needed for J-passport.
0 x
Top

Maybe it was just me, but I had a hard time finding the address provided here. Finally found the location on google maps through other reports and hints. But the street name is called Baribayev St 36, Almaty on google maps.

Here is the location on google maps and the bank where you have to pay, only cash. Otherwise, reports are accurate. I payed about €70 for a 15day double entry visa with a Dutch passport and LOI. 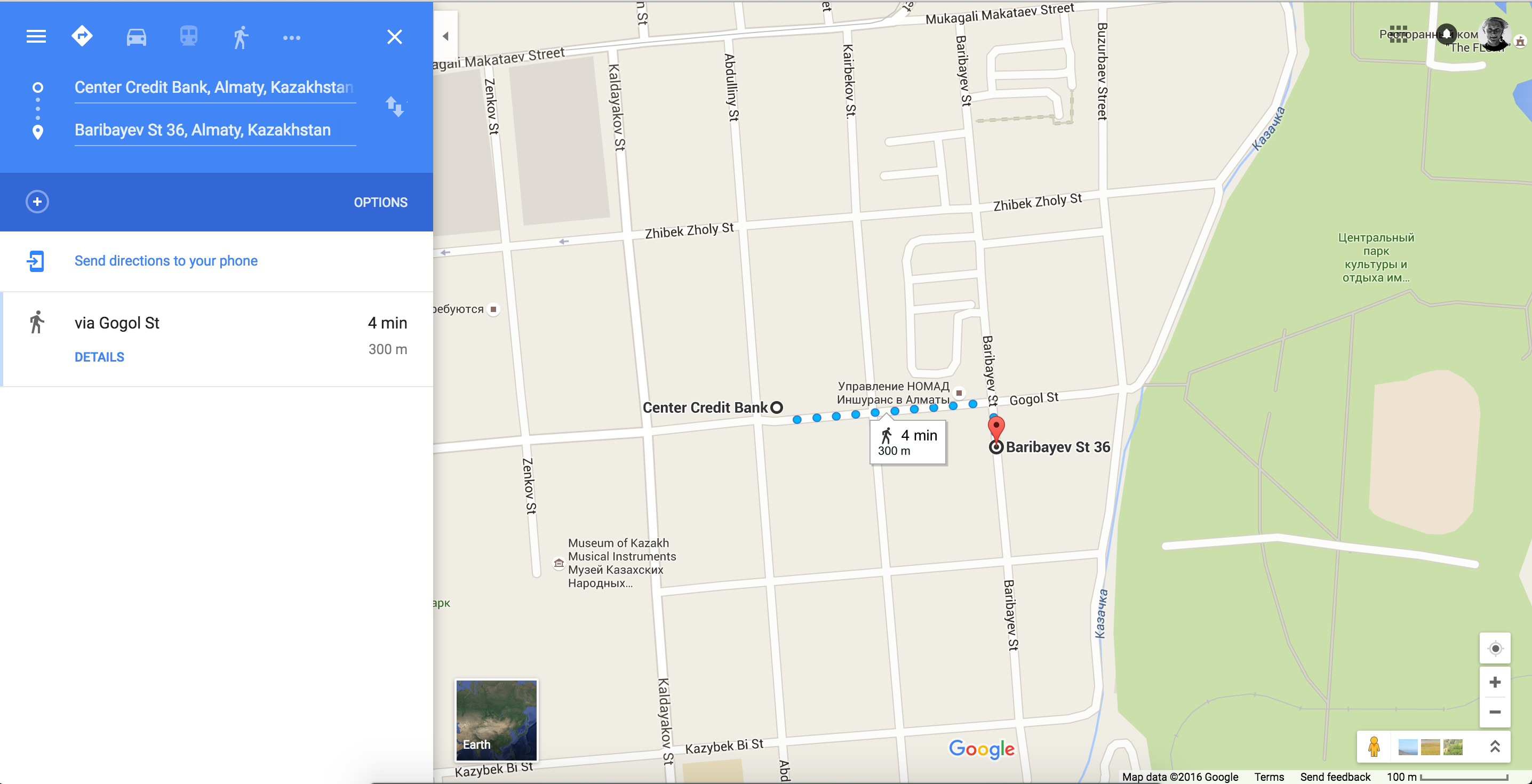