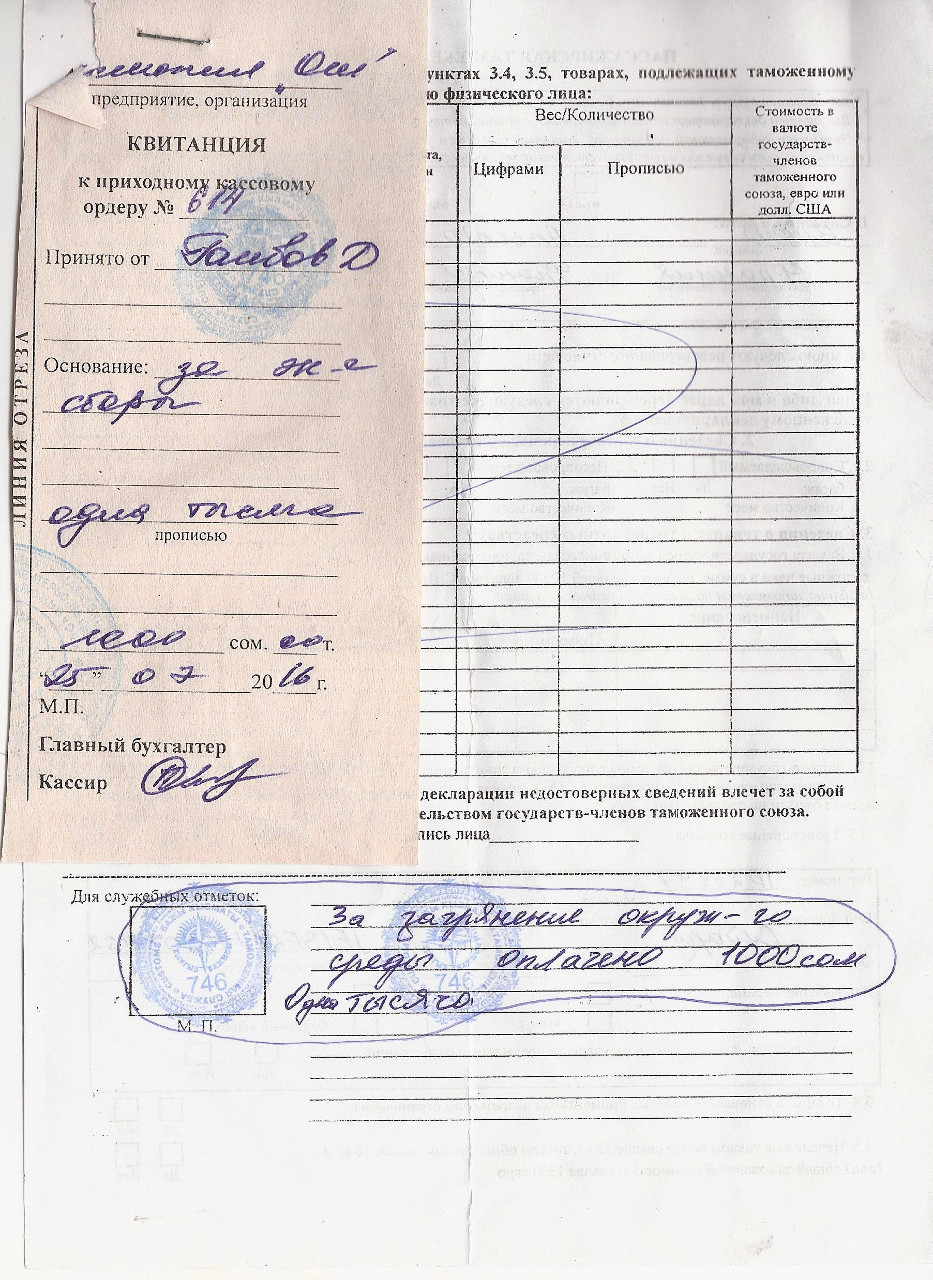 On the Tajik post at Kyzyk-Art, there were a sanitary fee (a guy sprays desinfecting product on the wheels !) and an import tax. All written down on two official forms with lot of stamps, that where collected exiting the country (maybe I have pictures in some SD card...). It did look legit also but who knows... I hadn't somani on me but USD and so I paid 20 USD for the sanitary, and 35 USD for the car import.

by Idberg
I crossed in July 2017, in a Tajik car with a Kyrgyz speaking Tajik driver from Murghob. He knew the game at the border and there was no scam at all. I did not expect problems and there were none - the driver had to talk to a lot of different staff and stayed in the hut of the veterinarians for 15 minutes, but either he paid no bribes or it was included in our agreed price anyway.

by GoingAroundPlaces
Update:
I just passed thru the Tajik border post at Kyzyl Art on my bicycle on 2 August 2017. Had to wait about 30 minutes outside the gate and another 30 minutes after being let into the compound while immigration processed and stamped out a huge line of jeeps and motorcycles headed into Kyrgyzstan.
Once I got into the office, however, I was quickly stamped in (it seemed that they were stamping everyone's e-visa printout now instead of an immigration card? Is this right?) rolled down the hill and had my passport number written down by the guy in the customs shed, and then was on my way. No one asked for money for anything or checked my luggage. Cycle tourists I met in Karakul also reported that they were not asked for money, and that the process was quick and easy for them as well. Not sure if we were just lucky, or if behaviour at the border has been cleaned up lately, but it was a nice surprise.

by robert
We went from Tajikistan to Kirgistan through Kizilart this month, with our own car:

Kirgiz side:
* Very friendly, no requests for bribes
* We had to pay 1000 Som (they also accepted Somoni we still had) environmental tax. There were signs on the wall (in Russian and English, the fee is 500 Som for a Motorbike, 1000 for a passenger car and 2500 for a Truck / Bus), and we got a receipt, so seems legit.
* They didn't look inside the car or checked any luggage, just asked if we had weapons or drugs with us.

by yhpans
We were three indians travelling - Did the crossing from Tajik to Kyrgyz side in a car with Tajik driver (having a Kyrgyz number plate car). We didn't even had to get down the vehicle in Tajik side. He took our passports and got us stamped out. The officer came and inspected the vehicle with luggage for two mins.

On the Kyrgyz side, we had the sticker visa in our passports. One by one we were called and took 2-3 mins for each person. Stamped in quickly and another officer inspected car with luggage for two mins and let us through.

by maat-re
As a solo traveller-hitchhiker from Russia I didn't have any problems crossing KZ-TJ besides being stuck there for more than a day because there were almost no cars passing at this time of year. Slept on Kyrgyz side as a guest, the guards were super friendly and nice, we parted as friends.

by marten568
Crossed from Sary Tash to Murghab in May 2018 in own vehicle. Kyrgyz side was easy, no problems. Tajik side, was first asked for $5 charge per person for the migration card. Seemed like an obvious bribe so we politely stood our ground and the guard eventually gave in reluctantly. Then paid the import tax of $25 which seemed official. in between there was a "drug smuggling control agency" or something like this that had to look at passport etc but no fees. All in about 2 hours on the Tajik side in miserable weather and just as we thought we were done we were pulled into another hut where we were presented with official looking documents (I don't speak/read Russian so who knows...) and were told we had to pay 240 somoni for disinfection and quarantine fees

by weissdergeier
Crossed in August 2018 from Kyrgyzstan to Tajikistan. Kyrgyzstan was inefficient but easy, done in about 30 min.

by thijsbroekkamp
We crossed a week ago from Tajik to Kyrgz and it was a very easy process. They did not search our car or anything, we had to pay 10 usd for the car and in Kyrgyz side 15 usd. No bribes and no eco tax of 1000 somoni. Quite an easy process.

by steven
Someone asked me to report the following:

Keep your wits about you, girls.
All times are UTC
Page 3 of 5