If it’s wind-blown dystopias you are after, Central Asia offers choice. Compared to the rusty boats at Moynaq or the nuclear radiation across the steppe of Kurchatov, the Pamir Highway hovels of Karakul feel rather lovely in their desolation. Bright skies, fresh breeze, shimmering water, cackle of geese.

But Karakul is also a harsh place to live: poor, cold and remote. It’s no wonder most of its houses have been abandoned.

Located in the Eastern Pamirs near the Kyrgyz and Chinese borders at a height of 3960 m, the history of Karakul starts when a large meteorite struck Earth, perhaps some 5 million years ago. A lake of 25 km diameter formed, within an impact crater of 52 km diameter. When arriving to Karakul, it is not immediately obvious you are entering a huge crater, though; scientists only discovered the structure in 1987 by analysing satellite footage.

There are plenty of Karakuls (Karakol, Qarakol, Qaragol, …) in the Turkic-speaking world. The word means black lake, but do not take that literally. It means the lake is fed by groundwater (black water or karasu) instead of glacier water (white water or aksu).

There is also a very beautiful lake on the other side of the border in China called Karakul. Worth a visit. Aerial shot of the lake and village of Karakul. The water is too salty to irrigate more land – via ROTW Regatta

Karakul is located roughly 50 km south of the border with Kyrgyzstan on the Kyzylart Pass and 100 km from Sary Tash, the nearest village in Kyrgyzstan. From here, you can turn to China over the Irkeshtam Pass, west to Sary Mogol, Daroot Korgon and the Karamyk border, or north to Osh. If you instead go south along the Pamir Highway, you will reach the next settlement, Murghab, after 130 km, where another track leads to China over the Qolma Pass.

On the way to the Kyrgyz border – via Novastan

An alternative route follows a track just south of Karakul that turns off into the Muzkol Valley, then southwest down the Kokulbel valley, and west to the geoglyphs at Shurali, before finally turning south down the Tanimas river to the uppermost village in the Bartang Valley, Ghudara. Continue and you will eventually reconnect with the Pamir Highway at Rushan.

For transport options, see transport along the Pamir Highway.

Things to see and do

The desolation of Karakul is the main attraction. A walk around the village is an experience in itself. Apricate, get mesmerized, play with a dog, ponder your existence.

If you want to go for a more serious walk, the promontory on the southern shore is good. Hike up to the South Aral peak at 4276 m (OSM) wherefrom you get a great view over the lake, the village and the transfixing vastness beyond.

Should take 4-5 hours. The start of the hike is 15 km south of Karakul village, so you will need some form of transport to get to the start. More precise directions for the walk are taped to a window inside Saadat’s homestay (or can be viewed here).

It’s possible to see some of the sights in the Muzkol valley in 1 or 2 days by jeep without having to drive the whole way into the Bartang Valley to Rushan (which might be impossible anyway, depending on the landslides or floods the spring has brought). If you are interested in the full traverse, we have 2 reports up: Karakul – Rushan and Rushan- Karakul.

Here you can see the geoglyphs at Shurali and meet the Kyrgyz shepherds who graze their yaks on the summer pastures of Jalang. Jalang also has a meteorite crater similar to the Ak-Bura crater between Murghab and the Qolma Pass.

The area is not properly mapped yet (OSM has a POI for Jalang, but nothing more), but you can follow the instructions in this Guide to the Principal Archaeological Sites of the Eastern Pamirs from PHIP. The guide also contains more background information on the geoglyphs and tombs.

There should be a possibility to stay over with the families living at Jalang, it’s usually 1 or 2 yurts staying there for the summer season. You can ask locals in Karakul or META in Murghab if the yurts are already/still there, but the nomads do not have a satellite phone, so there is no direct way of contacting them.

The view point from the top of the Kök Jar Pass marks the end of the Muzkol valley. After that, you should return to Karakul, or continue towards Bartang.

If the geoglyphs at Shurali are too far, you can get a similar experience nearby Karakul. The quality is much lower, though. 8km north of Karakul village, near the resthouse at Kara-Art, a track turns off west to 2 sites of geoglyphs and Saka kurgans, starting about 500 m from the turnoff. In total there are 19 geoglyphs and 25 tombs, dated from the 7th to the 2nd century BCE. More info in the Guide to the Principal Archaeological Sites of the Eastern Pamirs from PHIP.

The Roof of the World Regatta was an annual (kite)surfing event on Lake Karakul known as the highest regatta in the world. It ran from 2014 to 2017, but the authorities clamped down on the event after that and no news of a revival has been forthcoming. You can check out the Facebook page for news and videos or read our article on the seminal 2014 regatta.

You can still bring your kite and surf by yourself, of course. It’s friggin’ cold, but the winds are great and the landscape is one of a kind.

The lake is frozen solid from November to April: perfect for ice skaters.

Karakul Lake is classified as an Important Bird Area by Birdlife International with more than 90 species recorded.

The Markansu valley lies just before the border with Kyrgyzstan and is divided between Tajikistan and China. Due to its shape and location, it’s a place of extremes. With annual precipitation often less than 30 mm, it is one of the driest places in Central Asia. The valley acts like a wind tunnel: cold air masses from the Pamir Plateau are pushed through this relatively narrow valley towards the Tarim Basin, polishing a few small hoodoos.

A large print of this image of the Markansu valley graces the Caravanistan office. You can buy it from Radzelten (proceeds go to the Karakul school).

Often before noon the valley is deadly silent. In the afternoon, the wind picks up and reaches fierce speeds. Dust gets blown around and there is nowhere to hide. The contrasting temperature of heated land surface and cold wind creates whirlwinds. Countless dust devils rise. Strong whirlwinds reach the strength of tornadoes and are very dangerous – there are reports about camels with all their burdens lifted by winds. Locals believe(d) that these winds are fearsome spirits – jinn.

That’s why locals dubbed this place Markansu – the creek of death.

In spite of its macabre fame, the Markansu valley continued to be a path to enter the Tarim basin from the west, used by caravans until the early 20th century. Pack animals sometimes perished here and their bones used to litter the road.

There is an important archaeological site in the Markansu Valley. Archaeologist Vadim Ranov unearthed an early human abode here, In it were ashes from a bonfire, some weapons and animal bones. Their age was identified. It turned out to be a bonfire of 9500 years ago.

Where did the wood come from, in this lifeless place way above the tree line? Together with other mysteries of the Pamirs, like the cave paintings south of Murghab and plants growing hundreds of kilometers away from their nearest habitat, it gave rise to the hypothesis that the Pamirs have been rising at the incredible rate of 10 or 20 or even 30 cm a year.

This would explain where the wood for the bonfire came from: 10 000 years ago the Pamirs were much lower, and a forest was growing there. Although the geological facts seem to point to a normal rise of 2 to 3 cm per year, some mysteries remain unsolved and the theory still has its champions.

Half of the Markansu valley was transferred to China after the fall of the Soviet Union and the subsequent Tajik Civil War. If you are interested in the topic of the Sino-Tajik border dispute, we recommend this treatise by Assel Bitabarova in the Eurasia Border Review. 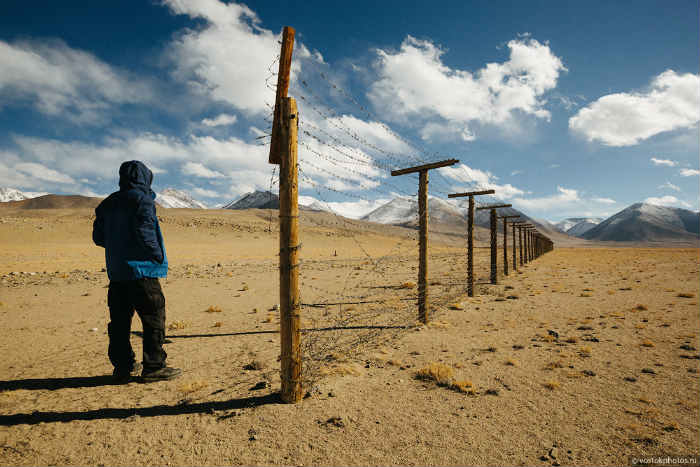 There are a few different places to stay in Karakul. We have not found anyone who speaks English, but some people speak Russian. None of the guesthouses are fancy: they all offer a roll-out mattress on the ground in a common room, outdoor toilets, a banya-style bathroom and electricity in the evening. Dinner and breakfast are optional.

We think Saadat has the cleanest, cosiest homestay. Costs around 10$, breakfast included. She also has a few beds. Dinner is tasty and we are not concerned about stomach problems.

Aigerim’s homestay we thought less cosy, less hygienic and less comfortable, but at 6$ it is correctly priced, and it attracts a steady clientele of backpackers. Ibragim’s is the least cozy of the homestays we checked out. We were also quoted 20$ per person…?

Guesthouse Arkin is rated as comfortable and clean, but it is more expensive (15$) and the food is rated as very poor.

Bring your own or eat at your guesthouse, but do not rely on buying anything more substantial than a loaf of bread in Karakul. Does Kara-Art, 8 km north of Karakul, still have a restaurant? We are not sure.

There is a mobile connection in Karakul but you cannot buy a sim card.

We cherry-pick the best ones

With our Silk Road travel planner

Stay in the loop